The versatility of COBRA Self-Defense – From Teaching Kids Anti Abduction Techniques to Training a S.W.A.T. Team.

The Richmond County S.W.A.T. Team recently reached out to C.O.B.R.A. for training. Robert Staton headed up the event using our Protection Specialist Curriculum.

Here is what the S.W.A.T. Commander said about the C.O.B.R.A. training his members received:

“I just wanted to thank you again for the unarmed self-defense training you provided to our team.

We encounter a multitude of situations that we train for each day requiring the use of all our equipment and various weapon systems, however, your hands-on teaching style allowed us to gain the knowledge and ability to face some of those day to day challenges without using anything but our hands.

Several of the guys on our team have already had the opportunity to use some the different techniques we learned during your class to avoid using an impact weapon or deadly weapon while taking someone into custody.

This not only prevented injury to the accused, but also to the officer. As you are well aware in society today, Law Enforcement Officers all over the US are under scrutiny for using excessive force, but by using the techniques we learned from you, it will allow us to resolve most situations both quickly and safely. Thanks again for sharing your knowledge and ability with us. Stay Safe. The American Association of Service Coordinators held their yearly National conference in Orlando with many guest speakers and workshops.

The Highest Quality For Your Employees Safety & Self-Defense Training

The first seminar was the COBRA – Defense Active Shooter Response Training and the second was “The Psychology of Self-Defense- How to Cultivate a Superior Survival Mindset.”

The workshop was finished with Joe Robaina covering improvisation tools and the effectiveness of cane defense.  The Service Coordinators expressed that it was an amazing experience and would like COBRA to conduct this event next year as well.

To schedule training for your group, organization or corporation please email info@cobracolumbus.com This insight into the minds and actions of “bad guys” reveals some common themes regarding how they choose their victims. That information is central to this Police Officer checklist of how to reduce the odds of being attacked.

While most offices have an “Office Safety Protocol” we call this the Agent Safety Protocol (ASP). The ASP will put you in control of your personal safety.

When you set the appointment on the phone, make it clear, “My partner and I will meet you there…” This statement plants the seed that there will be more than one person present. That is not good news for a potential bad guy.

Arrive on site early to:

Open the windows.
Unlock all of the exit doors.
Open the lock box.
Wait in your car with the doors locked. The danger here is that your car confines you into a small space, but in some cases the weather dictates you take shelter. Waiting in the car is still much safer than waiting in the property.
Send a text to alert your office where you are and all of the info you have on the
Keep your head up and aware of your surroundings.
How to Make It Really Hard for a Criminal to Choose You
ASP-The Showing

When the prospect arrives:

Watch for anything suspicious such as a man wearing a long coat on a hot summer day. That could be to conceal a weapon. If it feels bad, trust that feeling and depart asap.
Once the prospect clears your profiling, exit the car but stay well out of arms reach. The odds of an attack are reduced outside the property rather than inside, but keeping a distance makes it even more difficult to jump you.
Hold your phone up and say, “I’m sorry, but my boss is really strict on safety. Would you please move over to your license plate so I can send in a photo?” Quickly take the shots and send them in. Bad guys will probably object, which is your cue to return to your car and exit. Law-abiding citizens will have no problem with it at all.
4. Ask for a photo ID. Take the ID from arms’ length and the step back a few steps to take a photo of it to send to your office. Ideally move to the other side of your car, so there is a barrier between the two of you.

Remember, do not trust or accept anything other than a photo ID. Anyone can go to vistaprint.com and in five minutes for $10, create a professional looking business card complete with a fake name, address, and a phone number. It’s a common practice for criminals to give false information to mislead and get you to soften your defenses.

Because the lockbox is open, and the door already unlocked say, “I like for clients to enter the home alone as though you were coming home from work. Go ahead. You lead the way.” Give them about 10-seconds of lead time, but not so much that you lose sight of him.
Once you enter the property, keep the prospect in your 10 and 2 range of vision at all times.
Position yourself close to a quick exit as much as you can. However, if your back is to the exit, the bad guy may have a partner that surprises you. Be aware.
Remind him that your partner is on the way. Again, this statement is huge.
The key to making this work is to use it consistently. Studies show that it takes 21 – 30 days to develop a new habit. Stick to the Agent Safety Protocol for a few weeks, and like most everything in this business, it will become natural to you.

After all, it’s your ASP on the line.
CALL: 614-519-3186 for Phone Registration or Questions
Please email us at: info@cobracolumbus.com The C.O.B.R.A. Defense Active Shooter Response Plan™ (ASRP) for active shooter situations in schools, in businesses, and in the home. 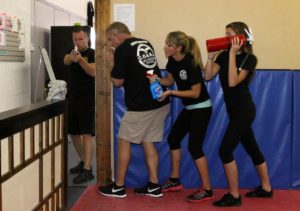 Who Is The Active Shooter Response Plan For?

Courses are available for:

– ABC ACTION NEWS ” As Real As It Gets – Active Shooter Training”

“I have not only heard countless articles of what to do if there’s an active shooter, but I have reported on them too. It’s the same story each and every time…However, today was different. Today, I actually learned something. This isn’t your prestigious Emmy story, this isn’t your investigative report, this isn’t the story of moving mountains or interviewing a murderer. Instead, its a story that could truly save your life. These are just a few survival tips I want to share with you. Survival tips I hope you never have to use. Survival tips we as humans will only hope we won’t have to remember. ”

What Is Active Shooter Response Training?

An active shooter is someone who opens fire on a group of unarmed, innocent people. Columbine, Aurora, Newtown are just some of nearly 100 Active Shooter incidents worldwide.

This program was created by a seasoned law enforcement officer with active shooter training. We can tell you from experience that these killers will always exist. You cannot stop them. You cannot create laws to successfully keep them suppressed. They will find a gun, they will find soft targets, and they will do everything in their power to kill a large number of people. The C.O.B.R.A. Defense Active Shooter Response Training is designed to address this reality and to minimize the damage.

Many people simply don’t want to think about something so horrible because it makes them feel helpless. But you will see that there are many things you can do. You have many advantages that you don’t even know about. Even a basic understanding and education in this area can save lives. By the time you finish this course, you will have that basic understanding and education.

Not Just For School Shootings

This training isn’t just for school shootings. Shootings can happen in many different locations, and they happen at random. You have no way of knowing in advance when or where this is going to happen. You may be sitting in church on Sunday, minding your own business, and have no idea that a psychopath is armed and is headed in your direction. The first indication you have that anything is wrong is when the gunman starts shooting. You have to be prepared to react to it. 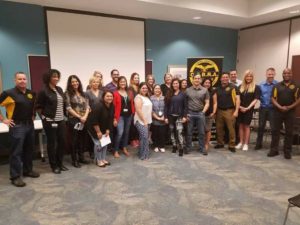 Tarpon Springs, FL — With the massive jump in active shooters and workplace violence, organizations are finding creative ways to offer expert training for employees and agents. According to COBRA-Defense CEO and Founder Chris Sutton, there are three ways organizations are leveraging their live workshops.

“We’ve structured our programs so that organizations can offer CEUs for participants.

They are also using our training, specifically our active shooter training, as a team building event. Of course, the third reason is the most important. This training can save lives.”

COBRA-Defense, a global safety and self-defense training organization, has seen a significant increase in demand for their training programs so far in this year.

Organizations ranging from The Kentucky Real Estate Commission to the National Certification Board for Massage Therapists have hosted COBRA-Defense training workshops that earned participants CEUs.

Sutton says, “The training is exciting, engaging, and actually lots of fun. That creates a strong team building component. The CEUs are also a nice bonus for participants and the self-defense skills are with the participants 24/7. They don’t stay in the office. That’s the most important takeaway.” 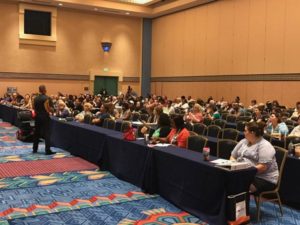